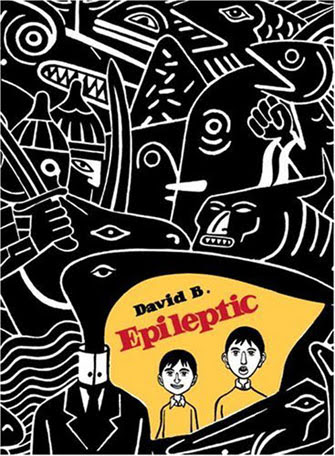 "When oh when will somebody give us a novel about epileptics?"
- Mordecai Richler (The Apprenticeship of Duddy Kravitz)

I just happened to be reading Richler's The Apprenticeship of Duddy Kravitz and David B's Epileptic at the same time. Imagine my surprise to find an epileptic character in both books. I love coincidences like that. Recently I got Maya Angelou's I Know Why The Caged Bird Sings. The same day, I'm reading along in Anthony De Sa's Barnacle Love and lo and behold, there's a quote from Angelou's book. It's some sort of whacked out conspiracy, man!

That's all a side note to David B's Epileptic, a graphic novel that was recommended to me by Dale and Olga back in December.

Epileptic is David B's memoir about growing up in a family affected by his brother's epilepsy. "Affected" is to put it mildly. His brother Jean-Christophe may be the one with the seizures, but everyone suffers with helpless, embarrassment, guilt, confusion, and, and, and,

At times the story became tedious and repetitive. In fruitless efforts to cure Jean-Christophe, the family tries various medicines, psychology, diets (most notably a macrobiotic diet), religion and just about every esoteric practice known to man. It's the esotericism that started to get to me: Swedenborgism, voodoo, alchemy, and so on. This aspect started out really interesting but then I just found myself cringing everytime the family sought out a new guru. I get it, they were desperate. Enough already.

If it was a regular novel, it wouldn't have worked.

Fortunately, it's not a regular novel. The story is saved a hundred times over with David B's art. Not that I've read many graphic novels, but it's the best I've seen so far. The way he interprets and represents specific scenes and characters is beautiful and creative. Sometimes it's as simple as always drawing a particular character with a cat's face because as a child he thought the man resembled a cat. In one scene, onlookers are shown with grotesquely oversized eyes as they stare at Jean-Christophe while he seizures in the street. And one of my favourite techniques is the use of a dragonesque monster that eventually almost never leaves Jean-Christophe's side, representing the epilepsy, of course. 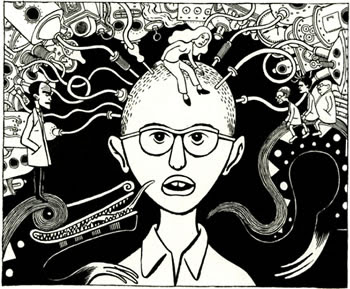 (Cross-posted at The Book Mine Set)
Posted by John Mutford at 1:23 AM

Email ThisBlogThis!Share to TwitterShare to FacebookShare to Pinterest
Labels: David B, Epileptic, John Mutford, The Book Mine Set

I think I am going to read this one. It looks a bit different than my normal reads.

I'd love to hear your thoughts when you're through.

I didn't say it in the post, but it's probably worth noticing that most critics seem to agree that the title has lost something in translation. Asides from the connotations of the original French that didn't carry over, I also think the English title makes it sound like a TV "Disease of the Week" movie. There are emotional moments, loads of them, but it's not burdened with cheap, politically correct sentimentality at all.

Welcome! I'm Nicola and I've been the host of this blog as of 2012. Previous hosts have been Vasilly, Chris and Nymeth, Laza and the originator, the much-missed Dewey. I hope this challenge will help spread the love for the graphic medium as well as lead those who already love it to great new books.

Comics (kom'iks)n. plural in form, used with a singular verb. 1. Juxtaposed pictorial and other images in deliberate sequence, intended to convey information and/or to produce an aesthetic response in the viewer. - Scott McCloud, Understanding Comics

It's never too late to join!

Give graphic novels a shot!